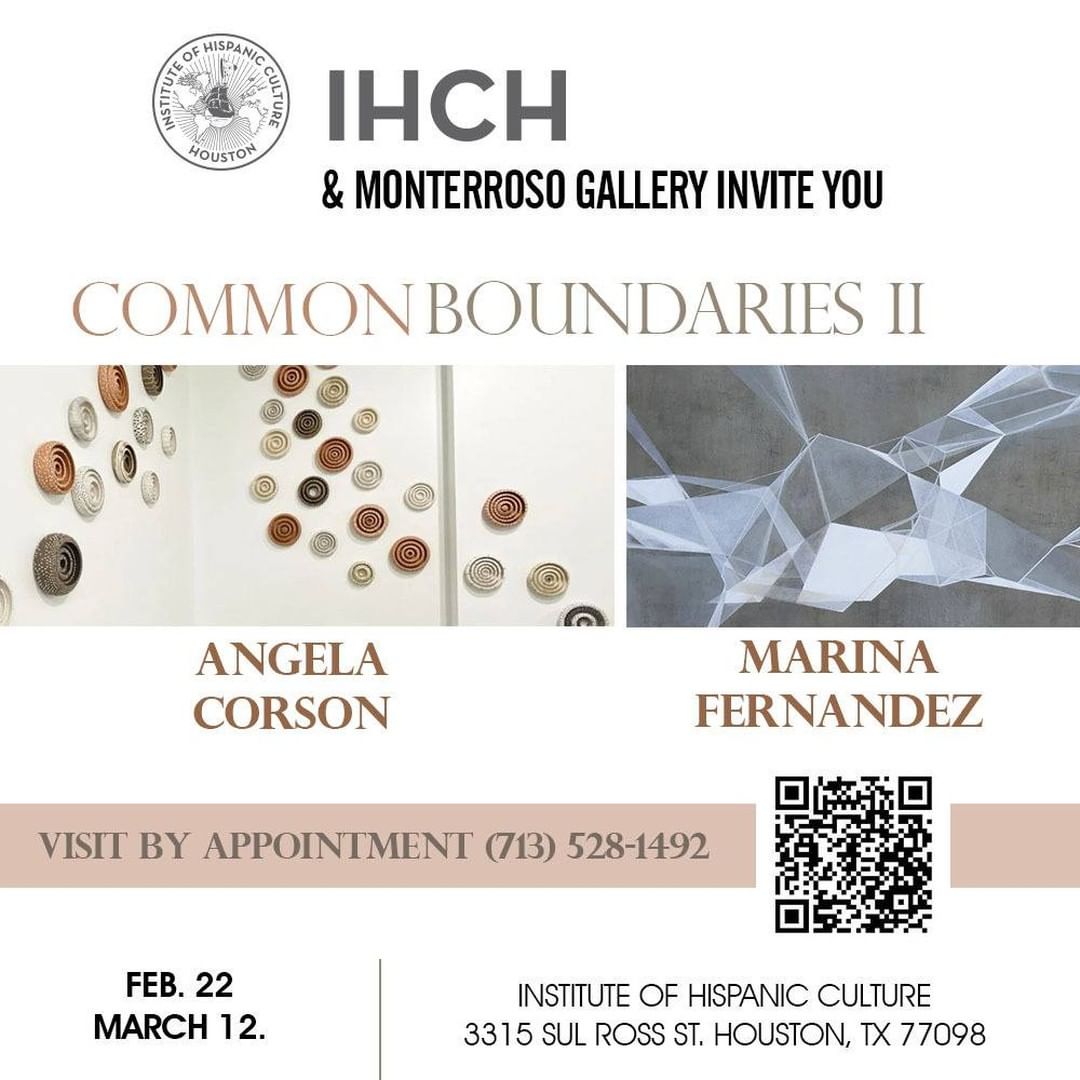 In this space one etheric being plays hide and seek amongst the angles, planes, mirrors, and organic bursts. Angela’s and Marina’s artwork creates a dialogue where Angela’s metal sculptures captured and solidified Marina’s geometric prototypes, as the inner structure of white birds. The warmth of Angela’s ceramic colors responds effectively to Marina’s painting’s tonality. This dialogue extends for both artists, and it shows their passion and commitment to their chosen media while reflecting the high quality of the presented work.

The IHCH is pleased to present the work of two emerging local artists members of Latin American Women Artist of Houston, LAWAH. Angela Alvarado Corson is a Houston-based artist with more than 20 years’ experience in large scale installations and murals, as well as a strong background working with charcoal, oil, and acrylic painting.

Her artistic investigation has recently included the creation of metal sculptures. Angela’s main inspiration comes from her realization of the limitations of language. Through her pieces, she seeks to express what cannot be put into words, and to find a way to fill the voids found in written and spoken communication.

As a result, Angela explores multiple media to find the most effective way of communicating through the intrinsic possibilities of different materials. Angela’s works have been shown in exhibitions in the United States and abroad, and she has received recognition several times in her community.

Angela was raised in Bogotá, Colombia, and has lived in the United States since 1995

Marina Fernandez is an Argentine Industrial Engineer with a lifelong passion for art in all of its forms. Through her artwork she combines her love for nature with her experiences living in different cultures.

She studied Fine Arts at Universidad Nacional of Rosario. She is a current student at Glassell School of Art from the Museum of Fine Arts in Houston.

Marina’s paintings further utilize space as she constructs a world with her own authentic geometry, achieving a balance of structural lines, planes, and the ambiguity of transparencies. Her perception is fueled by her technical background as an engineer, and her passion for mathematics. Her “Boundaries” series originates from contemporary art cartography, which allows her to reinterpret her environment and create geometric spaces.

Keep in touch with IHCH on social media.

Copyright © 2021 Institute of Hispanic Culture of Houston All rights reserved.